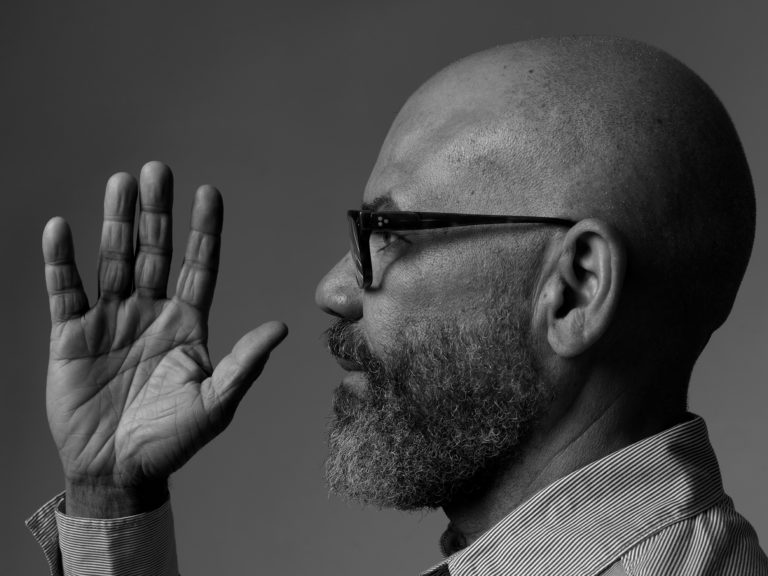 Suriname-born Dutch artist Remy Jungerman (1959) lives and works in Amsterdam. He attended the Academy for Higher Arts and Cultural Studies in Paramaribo, Suriname, before moving to Amsterdam where he studied at the Gerrit Rietveld Academy.

In his work, Jungerman explores the intersection of pattern and symbol in Surinamese Maroon culture, the larger African Diaspora, and 20th Century “Modernism.” In bringing seemingly disparate visual languages into conversation, Jungerman’s work challenges the established art historical canon. As art and culture critic Greg Tate has remarked “Jungerman’s work leaps boldly and adroitly into the epistemological gap between culturally confident Maroon self-knowledge and the Dutch learning curve around all things Jungerman, Afropean and Eurocentric.”

Born and raised in Suriname, he is a descendant, on his mother’s side, of the Surinamese Maroons who escaped enslavement on Dutch plantations to establish self-governed communities in the Surinamese rainforest. Within their rich culture, many West-African influences are preserved including the prominent use of abstract geometrical patterns. Placing fragments of Maroon textiles, as well other materials found in the African diaspora such as the kaolin clay used in many African religious traditions or the nails featured in Congolese Nkisi Nkondi power sculpture, in direct contact with materials and imagery drawn from more “established” art traditions, Jungerman presents a peripheral vision that can enrich and inform our perspective on art history.

Jungerman represents the Netherlands at the 2019 Venice Biennale with Iris Kensmil. In 2017 he was nominated for the  Black Achievement Award in The Netherlands.

In 2008 he received the Fritschy Culture Award from the Museum het Domein, Sittard, The Netherlands.

Jungerman is co-founder and curator of the Wakaman Project, drawing Lines – connecting dots. Wakaman, which literally means, “walking man” was born out of a desire to examine the position of visual artists of Surinamese origin and to raise their profile(s) on the international stage.

His work has been featured in numerous publications and acquired by various institutions and private collectors worldwide.

Remy Jungerman and Iris Kensmil selected for the Dutch Pavilion 2019.

Work of visual artists Remy Jungerman (1959) and Iris Kensmil (1970), brought together by Benno Tempel for a joint presentation, has been selected as the Dutch contribution to the 58th edition of the Venice Biennale, that is to take place in 2019. The selection of this exhibition, entitled ‘The Measurement of Presence’ has been made public by the Mondriaan Fund, that was advised in that regard by an international jury.

Materials For the Arts,  New York

In the Presence of Absence, proposals for the Museum Collection, Stedelijk Museum, Amsterdam
Young Artists: One, Presented in collaboration with OpenArt, Fridman Gallery, New York

Bank Secrets in the Attic, Museum Amstelkring, Amsterdam
We are always on the edge of the wilderness, W139, Amsterdam

Closer to One Another, Biennial of Havana, Cuba (cat)
The Container, Künstlerhaus Bethanien, Germany